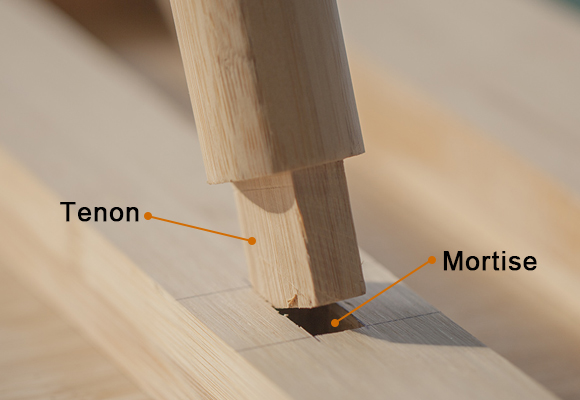 A Complete Guide To Making Mortise And Tenon Joints

Mortise and tenon joints have been used for thousands of years by woodworkers across the world to join two pieces of wood. It’s an ideal type of joint to make cabinets, furniture, and other woodworking projects. As a strong and durable wood joint, the mortise and tenon joint can be used by both beginners and professionals.

Though mortise and tenon joints include many variations, the basic form is simple, comprising the “tenon” tongue and the “mortise” hole. The tenon is precisely inserted into the mortise, forming a mortise and tenon joint. When the joint is formed, we can use glue to secure it or use wedges and pins to lock it in place.

More than 7000 years ago, mortise and tenon joints began to be used in wooden architecture and furniture, according to historical records. Let’s take a look at some examples. The earliest known application of the mortise and tenon joint was building the wooden lining of water wells in the Neolithic Linear Pottery culture. It was also found in the wooden planks of the “Khufu ship” which was a 143 ft long vessel of the Fourth Dynasty around 2500 BC. What’s more, the world’s oldest complete wooden architecture, which was a well near Leipzig also applied the mortise and tenon technique.

How To Create A Mortise And Tenon Joint?

Step One. Cut The Mortise First

Make sure the size of the mortise before you start the cutting. Usually, the thickness of the mortise equals 1/3 of the wood board’s thickness. The length should be 1/2 of the board’s width.

After determining the size, you can use a plunge router with an up-cut spiral router bit to create the mortise, ensuring a clean mortise bottom.

A table saw with dado blades can create tenons with accurate sizes and high precision. Before cutting, set the height of the blade for the shoulder and face cuts respectively. Use the fence to ensure the length of the tenon.

Step Three. Connect The Mortise And The Tenon